Oh hai!  I haven't blogged since the end of last year, so, just over 6 1/2 months.  Part of it is, as I'm sure you'll realise, laziness.  However, in fairness, I did move house, and the oven in our new(ish) place doesn't work.  So most of the time, I barely feel like cooking, let alone blogging about it.

However, I felt the need to blog about this. 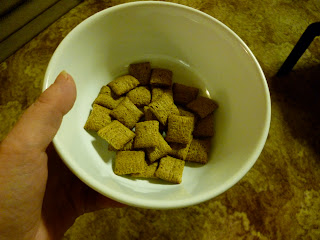 ...is a single serving of Mornflake Chocolatey Squares cereal*.

Look at that!  You can almost count the number of biscuits in the photo!

I wanted to title this blog post "People at Mornflake are on crack", because clearly there are drugs involved when you think that amount of cereal is gonna be filling for a grown-ass adult (the box is brown and doesn't have any cartoon animals on it, so I'm calling it an adult cereal).  Also, if you were to taste this cereal, you'd know that it's next to impossible to eat that little.  It's so good.  So. Good. The only cereal better than this is Speculoos cereal.

One 30g serving (dry) has about 143 calories.  And I've been eating probably thrice this amount plus milk with every bowl (and I like a lot of milk in my cereal).  I guess at least I'm getting a lot of extra vitamins and iron.  But this solves the mystery of why I've been gaining weight even though I'm working out 5 times a week.

I think I'm gonna go back to oatmeal** in the morning.

*Though not verified with the company, who would probably give me the "traces of milk" line, several thorough readings of the ingredient list assure me this is vegan.

**I recently bought 2 slow cooker cookbooks, and one of them, The Vegan Slow Cooker, has a few oatmeal recipes.  The author, Kathy Hester, has loads on her blog as well.
Posted by Rachel Hallows at 14:23 2 comments: